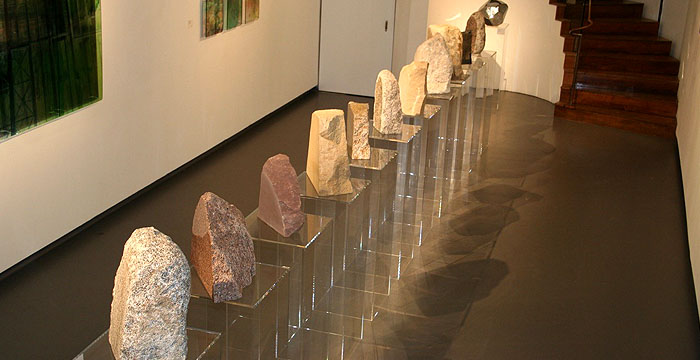 We are thrilled to have our Callow Old Devonian Red Sandstone and De Lank Silver Grey Cornish Granite featured as part of an exhibition of works by Angela Palmer at the Fine Art Society in London.

Earlier in the year we were contacted and asked to produce “maquettes” from our Callow Sandstone and Cornish Granite. A maquette is a sculptor’s preliminary model or sketch which is normally in miniature compared to the final piece. Both pieces had to be of certain shapes and dimensions and were to be polished on one side and left natural on the other.  Our stones then found their way to London and The Fine Art Society where you can see them exhibited until Friday 27th November 2015.

“To mark the advent of the Anthropocene, Palmer has created a ‘spine’ of rocks, sourced from the length and breadth of Britain, allowing us to take a 3000m year walk through our nation’s geological history.”

“Anthropocene” is a name that derives from the Greek words anthropo – ‘man’, and cene –‘new’. This is the proposed name of the new geological era which will follow the current era called Holocene epoch.

“The rocks will be polished on one side – exposing for the first time the magnificent ‘underbelly’ of Britain in a complete geological sequence – while on the reverse the stones will be left rough, as we may encounter them in the landscape today.”

It is always inspiring to see how our raw product can be turned into something so creative and informative.